'The Fascism of Youth' 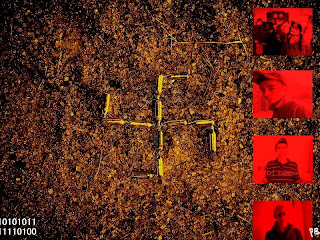 "The Fascism of Youth". July 2007. Part of the 'Violence & Intimidation' Manifesto node.
Discarded Nitrous Oxide bottles arranged on smashed glass in the farm shed around 10 hours after the rave disbanded. Also, in the top right of the work, incorporating a still of footage from the actual village rave found on youtube, and several shots of the 'geez' who helped organise the all-nighter among the dead rats and deadheads. His 'sense of fashion' is clearly only overshadowed by his taste in music.
The Chav Culture as Third Reich?
I could go on...
pb.
Posted by Phil Barrington at 16:31