'His Willingness to Conform (in Denial)' 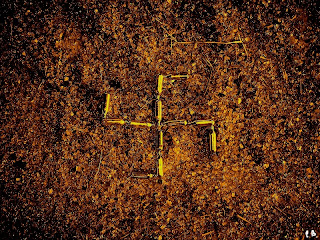 "His Willingness to Conform (in Denial)". July 2007. Part of the 'Violence & Intimidation' Manifesto node.

An array of used laughing gas bottles found by the artist in the area of the rave the day after the night before, and manipulated on-site to portray an anti-fascist sentiment on a canvas of smashed glass, a sentiment which extends to the mainstream conformity of the young under the false guise of an anti-establishment movement.
How can illegal raves (or rave culture as a general concept) be bloomin' "anti-establishment", when the kids have already conformed to a mainstream, Burberry/Beatnik-draped Adidas youth culture that promotes simply getting out of your head in brand-name sports gear, as opposed to getting out of your safety zone and sticking your neck out for what you believe in? Come on people. You must try harder.

Don't get me wrong. I'm all for a certain self-induced brain obliteration every now and then, but its never been the be-all and end-all purpose of my own wretched existence.

Taking a cursory look at a few Myspace accounts of these 'raverz' clearly "avin' it large" you can't help but think that there's no all-conquering political/moral direction of outrage left (that punk or ska/reggae provided, for instance), just miserable apathy and selfish, bloated decadence. Worse. Miserable apathy with a whipped cream canister up yer nose.

Oh, and if they wanted to listen to extreme electronic music on the night, they should have come round to mine for a few CDs. I have a selection of hardcore audio terrorism that would make their poor little ears bleeeeeeeed.