As I mention at the bottom of my 2007 Manifesto list, I plan to create multimedia experiments this year.

Earlier this month I devised what I am referring to as my ‘Awareness Trilogy’; three very different, massively public art events. The latter two events I won’t make mention of yet, as I believe in bad luck, but I can talk about the first one, because that’s now NOT going to happen.

There is a massive, white factory near the North Lynn Industrial Estate that towers over all nearby buildings and constructs, and cuts an imposing figure on the skyline – always jutting into my line of sight when I work around that area. Almost hypnotic in its bullying presence.

The first event In my 'Awareness Trilogy' was going to be a massive projection of 10 images, projected onto the face of this factory building at night, for a 60 minute slideshow. The resulting effect would be that most households in North Lynn could see the images, such as ‘The Wretched’ (which concerns their voting for the BNP), and other works that detail the negative aspects of youth/yob culture. I was also going to air my Ouroboros Triptych exclusively on the factory wall. And my ‘From the Mouths of Babel’ piece (imagine a 100ft dirty toilet, with George Bush head, gaping out into the night for all to see).

Now, I planned all of this event in minute detail; I surveyed the area, I looked round the site to see how I could access it covertly with my laptop and hired projector (I was going to wear a fake beard on the night, of course), and I researched my hasty exit. I even built up a list of names of local/national journalists that I would contact 4.5 hours before the projection was due to happen, for possible widespread coverage.

But one small problem; the bloomin’ projector. I had contact with 3 different companies and found a London company called E/T/C, who said they would lease such a high-powered projector out to me. No problem. A chap there arranged all the details and everything. Fine.

The company said that I would need to hire an actual technician for £500 and the equipment for another £500. On top of that, I would need to pay £200+ for a set of slides taken from my images. And it would most likely need to be plugged into the mains power supply – not a portable battery.

So. To recap; To illuminate the night sky with 10 of my images to thousands of North Lynn citizens, I would need to pay in excess of £1,200 for 60 minutes work, have a lumbersome technician trailing behind me, and have the projector set up and plugged into the power socket of a house or building nearby. It wasn’t going to work.

I reluctantly, yet swiftly, jettisoned the idea.

Now onto the 2nd event of the trilogy, which won’t cost me anything…

ps. Here’s a rough mock-up of what the projections could have looked like: 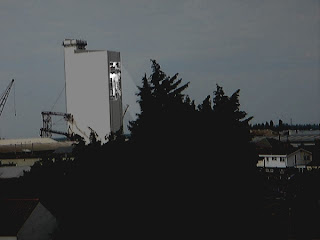 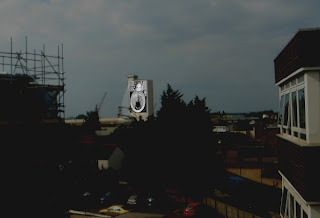 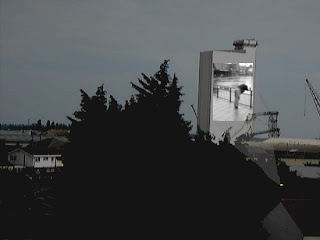 [oh what could have been]
Posted by Phil Barrington at 04:54

Phil - you never cease to amaze me! You may have even got onto the front page of the Lynn News with that stunt!

Ah yes, what could have been. I have other, less ludicrously expensive ideas, so hopefully they will work out at some point this/next year.