[My review first featured on the official film website here.]


I set aside some quality time (and some quality wine), settled down and watched this deeply revealing documentary last Saturday evening. As just one person in a whole legion of long-time fans of Witkin's oeuvre I know that we've only been treated to a scant few documentaries about him in the past, brief in length, often exploring the more sensationalistic elements of his work and all leaving gaping holes in our understanding of both the artist and his work. 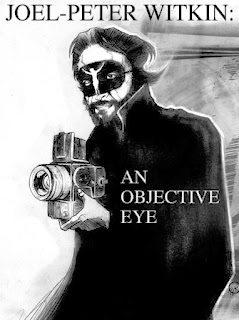 'Joel-Peter Witkin; An Objective Eye' finally fills in many blanks in our broadly sketched-out understanding of Witkin both as a human being and as a creative par excellence. Marino's highly-skilled production of a film confronts issues previously skimmed over in the past, highlights being Witkin's candid descriptions of his early sexual explorations and primal therapy experiments - often surprisingly hilarious anecdotes abound here - as well as confirming his moral, spiritual and religious beliefs at this time in his early seventies on a deeply troubled Earth (thanks to this film the oft-used word 'crazeoid' is now an indelible part of my vocabulary).

Ultimately the older Witkin is portrayed here as relaxed and almost joyfully resigned to his mortal fate and creative legacy. Where once there was bombast and driven certainty in interviews during his younger years there is now an hypnotising and almost whimsical frivolity and relaxed subtlety in his conversational manner, fascinating to behold.

Are there questions left unanswered in this film? At 2 hours in length there aren't many. I'd have personally liked Witkin to clear up the Vietnam War Photographer myth/confusion once and for all on film (though this has now been explored with a lengthy out-take from the film, reflecting his army years on the film's Youtube Channel), he seems to contradict his loss-of-virginity tales from the past with a more hetero-based scenario and, related to that, he doesn't really explore his formative carnival experiences. I'd have also liked to see his on-screen response to certain unsolicited rip-offs of his imagery such as the infamous Closer video by NiN. And is that actually his assistant Kris starring in his boldest and grimmest work of the 2000s, 'Ars Moriendi'?
However, such remaining questions are merely curious and unimportant ones as we are given a very exhaustive exploration of Witkin and his work in 'An Objective Eye'.

Sure, there's no grue here that's vividly evident in other Witkin documentaries (no wrapping wire around a foetus skull or wrenching out of horse's eyeballs in Marino's feature, such scenes found in a much older documentary which seem to be curiously at odds with his 'not getting involved with the bodies' dialogue in this picture), but less-sensationalistic and more mature highlights are many and very quotable, with some very insightful private family footage and archived tv critiques of his work rounding off the titular objectivity of this film.

'An Objective Eye', then, does fill in the necessary gaps, is vitally important to anyone's understanding of Witkin, and is the most definitive, mature and skilled documentary of the photographic artist that we're ever likely to see.