So, the King’s Lynn stop of the Cracktown tour has ended, and I’m catching up on all the little things that have piled up on my creaking and spluttering back burner for the past 6 months (that is, before the promotional campaign for the Cambridge show in April picks up). The first task I managed to complete, post-KL, is the Steven Pottle Podcast. Steven is a poet and artist that I was lucky enough to personally meet for a drink around 8 years ago, during the run of his solo gallery show 4Real in King’s Lynn Art Centre. I liked the cut of his gib back then, and his references to pop culture (and to the lost genius that is Richard Edwards) really interested me.

Even back then I felt that our paths would one day cross once again and, due to the magic of social networking sites, I hooked up with him before Christmas for a recorded session of tipsy discussion and poetry readings. It was great, and the results were uploaded here a couple of weeks ago. After the session itself, Steven kindly gave me a sheath of printed poems for my delectation. It was admittedly only until this February, when I managed to complete the editing of the podcast, that I pulled out that pile of poems and out fell a secret sketch present for me from Monsieur Pottle; 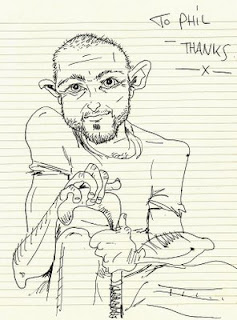 Well, Steven, thank you so much – you truly are a man of gifts – and I hope to catch up with you again one day, hopefully at one of your poetry readings in London.

Today I visited the Norwich Playhouse team to discuss curatorship issues for the final leg of my UK Cracktown v1.0 tour (a ‘save the date’ reminder; the show runs for the whole month of September 2009). They were extremely kind and supportive fellows, and I bumped into the legendary Jimmy Greaves on the stairs afterwards; partnering with Ian St. John, to me he was a memorable icon of ludicrous soccer commentary when I was a wee nipper (and, of course, a decent footballer before then). He looked younger in person than his tv appearances portray and, in his little tracksuit and befuddled musings on local parking facilities, he was a very sweet, endearing chap.

He was far too trusting, though. Greavsie’s team, setting up for the talk he was giving at the venue that night, left a motherload of rare soccer memorabilia unguarded in the foyer (signed shirt by Pelé, etc.) that I could have easily swiped at any moment. It’s just lucky for them that, over time, I have grown to dislike anything at all to do with soccer.

I felt quite melancholic after the meeting, for some ufathomable reason, but a brisk stroll around Norwich City in the icy-cold air soon perked me up before meeting with my SO for a meal at The Library restaurant. The Grade II listed building is stunning, the décor stately and gorgeously vibrant, and the food fantastic; heartily recommended – the mash with wild boar & apple sausages are really to die for. Officially my new evening haunt in Norwich (well, that and the rough and ready but entertaining Wine Press cellar bar on Guidhall Hill).

Leisurely making my way through the darkened streets of Norwich after the meal I felt safe and peaceful – no hint of trouble or aggro around the corner. Arriving back at the King’s Lynn Bus Station near midnight, and it was an entirely different, sadly predictable story. Hearing indecipherable shouts and human growls from afar, I approached the infamous Norfolk Street (for the uninitiated, think Dante’s Inferno with kebabs) to get a taxi home. 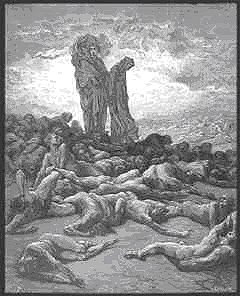 It was then that I caught sight of the rabid gentleman. Here was a fine specimen of a knuckle-dragger if ever I saw one, tearing his shirt off like a babboon, running about the street screaming and shouting unintelligible things, and generally squaring people up like a tit. He clocked me, and only narrowly missed grabbing my paunchy frame before I ducked into an eaterie for a quality pizza that I really didn’t want.

Waiting out the incident in my luridly coloured pizza parlour refuge whilst a police riot van screeched to a halt outside the takeway’s front window, pathetically peeping out of the door as several officers threw the dog into their cage, I felt cowardly, yes, but alive.

The quaint Norwich memories of dear Greavsie and those heavenly wild boar sausages were faint to say the least.

Posted by Phil Barrington at 06:12

Strangely enough I've just been thinking/talking about the same thing! Getting down to Norwich, finding a large warehouse to work in, pop in to OUTPOST on a regular basis, swig strong coffee from the best coffee houses of the city - and go to the Library restaurant extremely regularly. Ahh, the change and inspiration it could bring.