Addicted to Static (& Other Experiments in Sound)

Well, ‘addicted’ is a bit extreme, but I have certainly fallen into a firm habit of listening to 10 minutes of static on my iPod before sleep every night.

Having always had an extremely keen interest in avant garde electronic music / aural experiments / sonic terrorism / brainwave annihilation or whatever pretentious term you want to use, I recently came across news about the i-Doser program.

Basically, the i-Doser (largely unheard-of in this country) is a brainwave synchroniser that runs from your computer which, on the click of a mouse, ‘injects’ a dose of sound patterns (of various simulated experiences) into your brain via your headphones. These 10-30 minute sound patterns can nurse your brain into thinking your body is undergoing a wealth of chemical experiences from the safety of your own office chair.

But what really interests me are the sound files called ‘Hand of God’, ‘Gates of Hades’, and ‘White Crosses’; according to the accompanying notes, these are extremely experimental hallucinatory brainwave synchronisers that can lead to the listener having dark or sinister experiences. Top stuff.

But I am currently constantly listening to the ‘Lucid Dreaming’ bout of static sounds before bed, and my dream structures have become much more fragmented and self-conscious as a result. Very interesting – you constantly feel like a completely different human being in your dreamscapes. I can’t wait to incorporate ‘Gates of Hades’ into my dream cycles.

When I first downloaded the music files, I have to say I was less sceptical than most – I didn’t once think that this was an inept Magic Eye fad for the noughties. I was more open-minded because I know I am very susceptible to binaural brainwave stimulation.

In the early 1990’s I purchased a tape of ‘Loveless’ by sonic pioneers My Bloody Valentine. Even after an initial listen I became quite nauseous – but not in the way anyone would feel after listening to a Simply Red album, for instance. No, the effect the music had on me was actual physical nausea mixed with nervous energy. I thought it was just something I ate, but the effect continued every time I played this classic album. I didn’t think too much more about it, until I read on the net many years later that other people have experienced disorientation and sickness when listening to the album. It was all down to ‘binaural patterns’, apparently.

I thought it was astounding that, even though all sounds audible to humans have an effect on the listener, the effect that MBV had on me with the ‘Loveless’ album was pretty unambiguously mind-blowing.

So, then in my mid-teens, I ventured further into the music of experimental pioneers such as Hafler Trio, Autechre, Lou Reed’s Metal Machine Music, and the more extremely layered output from Aphex Twin. I even dabbled with EVP (Electronic Voice Phenomenon – the recording of voices of unknown origin, or ‘communication with the dead’) in an attempt to gain new sonic/brain experiences. I often coupled these intense listening sessions with long bouts of curtains-closed solitude, sleep deprivation, and Golden Dawn-era magickal instruction. It would be fair to say that I was pretty much addicted to strange new conscious and subconscious experiences back then – I probably still am. I couldn’t tell you exactly why. Maybe I was just another bored teenager in a rural setting who had no access to hard drugs. I dunno.

I soon wanted to create my own surreal soundscapes and, by the close of the millennium, I had recorded a bunch of cut/paste demos that were directly influenced by EVP and Hafler Trio. In other words, an industrial landscape that had strange speeches and unidentifiable sounds drifting in and out of a static foreground.

I recorded these demos under the guise of The ICB Project, the demos grouped under an EP called ‘Tear’*. The CD was of a limited edition of 1 (with free floppy disk of extras). In other words, no-one beside myself ever listened to them. Until recently. 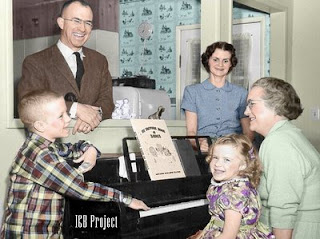 I unearthed these tracks from my archive, dusted them down, re-edited some of them and saved another demo from extinction, and they happened to be perfectly suited to being the soundtrack for my 2008 conceptual art project Cracktown v1.0.

It took nearly a decade, but the demos are now available for all to listen – if you have nothing else better to do. Admittedly, they are a bit chaotic (thus perfect for Cracktown), but there are some interesting peppercorns to be picked from the manure of these tracks - like the use of a Vicks Medicated Cough Drops advert from the 1950’s mixed with the sound of a woman screaming herself hoarse as she’s being violently attacked. Of dubious taste, perhaps, but effective I think. And that appears on the Cracktown ‘An Ending’ viral clip, found here.

Anyway, back to i-Doser. I thoroughly recommend you give it a go and see how your brain reacts to it. The free download comes with some free ‘dose’ MP3 files for your iPod or PC music player, including ‘Marijuana’ and ‘Cocaine’, but the more experimental ones can be found for download elsewhere on the net if you don’t want to pay for them through i-Doser. Though I cannot endorse you doing so, of course.

*Original tracklisting of ‘The Tear EP’;

1. Titles (Opening/Closing)
2. Embryonic Hero
3. Tear (Live at the Submarine)
4a. My Week Beats Your Year
4b. Communication With Others [secret track]

Posted by Phil Barrington at 04:48