The following series and miscellany of images are inspired by a night of hideous rave music and police inaction I suffered a couple of Fridays ago, when a large horde (as opposed to a small horde?) of 'Norfuk Ravrz' descended on my village like a band of Adidas wearing slack-jawed lemmings, for a rave in a farm shed about 900 foot away from my home.
The music wasn't the problem; I've listened to some appalling music in my time - some if it good fun. No. It was the snooping around that this litter of ne'er-do-well's were doing in my backyard at 2am that got my goat. Or any other farmyard animal you care to mention.
The entrance to my garden looks like, to a townie at least, an entrance to a field or back lane - so they were popping their canisters of laughing gas (Nitrous Oxide is the new E apparently) and getting confused as to how to access the path that led to their little illegal shindig, mistakenly venturing down my drive a couple of times. As I hid behind my 6ft high fence at 3am I overheard one say they were from North Lynn, so I knew reasoning with them wasn't on the cards. So I blinded one with my trusty Halogen torch.
They soon left and went on their merry way.
After calling the police I went to bed and thought nothing more about it.
I whizzed down to the shed the next day, following a strange, erratic trail of silver pellets on the way down the road. Upon closer inspection, these glinting sliver bullets were clearly Nitrous Oxide canisters.
Collecting a few from a bag of rubbish (see below), as well as many from the ground, I thought I'd make something out of them and capture my results. 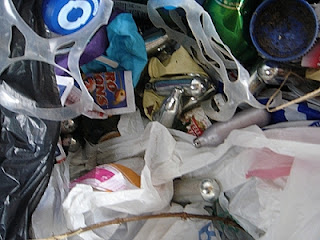 The drug canisters lost a little of their mystique for me when I found out that the gas pellets doubled up as whipped cream gas dispensers. If the cops ever came a-calling, I suppose, this rabble of youths could claim their innocence by holding a makeshift cake stall and stating that they were merely holding a 3am village fete. But I seriously doubt a court jury of 12 men good-and-true would get hoodwinked by it. 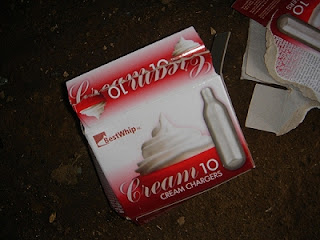 There were literally hundreds of these little blighters laying around the shed and adjacent field, so I took a couple as mementos for my lodge 'inspiration drawer', and was about to leave on my electric bike, when I saw a couple of dead rats on their own, still clearly stiffened by the rave boom that rattled their dessicated little skeletons in the early hours of the morning. I couldn't help but mirror them with the culture that inflicted itself upon their fading existences the night before.
These sorry souls posed for a couple of snaps before I left the scene of trashed farm machinery, pools of mandatory urine and piles of silvery pellets (that looked like they had been produced by the eager gullets of cyborg Owls) and returned home for a night of real ale and hard-drive defragging.
pb.

p.s. I found the contact details and photographs of the rave organisers on the net a few days later, after a 5 minute search, so decided to add their pictures in the mix too. Riiiiiiight next to the rats.
Posted by Phil Barrington at 17:16