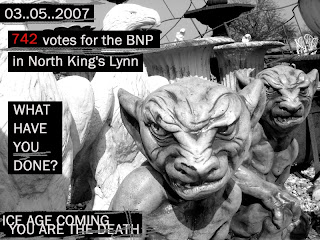 "The Wretched". May 2007.
Part of the 'Angels and Devils' Manifesto node.
Statistically, North Lynn is an area of high unemployment, low academic qualifications or educational achievement, and fairly high levels of migrants in recent times. The BNP took advantage of the feelings of threat and racial hatred in the area's white community, as they always do, for their own gains. Ms. Christine Kelly and her odious lover Mr. David Fleming (the 2 devils) stood for the BNP in North Lynn, with tacit support from the Lynn News, and managed to get 742 votes for themselves on polling day (3rd May 2007). Labour beat them this time, by 116 votes, but who knows? Maybe next time.

Incidentally, the newsletter the BNP created for circulation in North Lynn recently was complete lies regarding its funding statistics for local Ethnic Diversity groups.

Here's a tip; check your facts before voting for anyone.

Braindead tossers syphoning and twisting the support of fearful working class people for their own Holocaust-denying, fascist stupidity = The Wretched.

p.s. Fact Fans; I took the above photograph in a reclamation yard on the North Norfolk coast recently. The two demons above seemed to be planning something. Perhaps a violent uprising and takeover of the whole yard? The place had loads of decent bizarre stuff - from angst-ridden, rust-plagued victorian garden statues to wooden figures of tribal warlords with massive penises. The kind of garden accessories you DON'T see on 'Ground Force'.
Posted by Phil Barrington at 09:15