'Meat the Mutilators - Sponsored by T-Mobile' 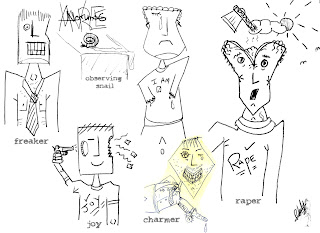 'Meat the Mutilators - Sponsored by T-Mobile'. Sometime in 2003.
The above is a montage of drawings I quickly did after having an idea (not since come to fruition) of a comic series entitled Meat the Mutilators. Now part of the 'Violence & Intimidation' Manifesto node.

The idea is this - I own copyright to this by the way, all you magpies out there; Each week, members of the Mutilator family (some named above) would hold a humorous conversation about current political events/showbiz gossip whilst slowly mutilating/disemboweling themselves in unique ways until they're a gibbering lump of steaming meat by the last panel of the strip (the punchline panel).

But the Cubist-esque characters appear again fully formed each week for another endless, unfeeling bout of self-harm and uncensored witty conversation. My plans included a self-made cloud that constantly hovered over the head of the 'Raper' character each week, always with a different deadly weapon (inevitably dropping an axe/bag of starved rats/life-sized Combine Harvester onto him while he discusses the ethics behind Michael Barrymore's existence, for example). My ideas were endless during their creation. Sadly, I haven't done anything with that main idea since. One of those 'round-to-it' ideas I never get to. Maybe they'll re-surface again one day.

Or maybe not. Who knows?