'Put ‘Em In A Field and Bomb The Bastards' 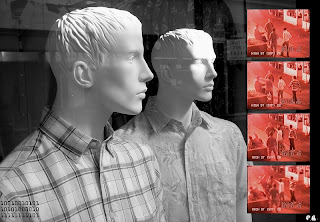 “Put ‘Em In A Field and Bomb The Bastards”. May 2007.
Part of the ‘Violence & Intimidation’ Manifesto node.
Seven chav neanderthals somehow escaped a jail sentence recently, after being convicted of a vicious gang assault on two Polish migrants outside the Hogshead pub in Kings Lynn town centre (opposite to where I took the above shot of the shop dummies).

Apparently, this gang of complete cretins became enraged when the two unfamiliar (i.e. foreign) faces entered their pub one night and proceeded to generally flirt with the (British) female bar staff.

After the two Polish lads left the pub and sat outside, they were confronted by this gang of Burberry-clad braindead Brits. One Pole put out his hand to indicate a peaceful handshake and he was immediately punched in the head for his trouble. The next few minutes were a frenzy of punches, kicks and slaps to the two lads, who were left lying on the street as the gurning chavs ran off, dragging their knuckles behind them.

Now, I’ve tried to research these adult toddlers on the net and only found a scrap more information about one of the gang members, Alfie Tooke, who is still allowed to play for Holt United FC even after the attack.

Of the gang of seven, the six chav cavemen who committed the violent racist assault are:

[all addresses published by the courts, so are of public knowledge]

They look like this (turn away now if you’re faint-hearted); 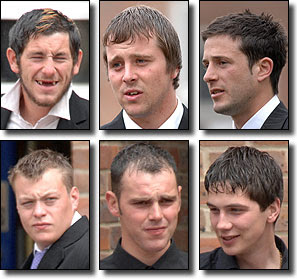 A seventh defendant, Liam Winton (19), of St Edmundsbury Road, North Lynn, denied the same charge, but was found guilty by a jury earlier this month.

After seeing the CCTV footage of the attack, I don’t understand why these morons were NOT given a jail sentence.

Judge for yourself by watching the CCTV film here;

If you want to make sure they are barred from every pub in King’s Lynn, give Pubwatch a call and express your disgust at them currently being able to enter the town centre any time they want;